Hi there and goodbye!

I've quit using my blogger site in lieu of a new and improved site, mommyinthemidwest.com.

I hope you'll follow me on over to mommyinthemidwest.com and enjoy your experience there!

Email ThisBlogThis!Share to TwitterShare to FacebookShare to Pinterest
Labels: blogging

So as I mentioned in my CTM365 post, we visited Holiday World & Splashin' Safari July 17-19.  I had never heard of it before moving to Indiana and although it's about a three hour drive, the park is promoted heavily at home on TV and radio. We had been wanting to go and had talked about it off and on for several years, so when another long-weekend trip we'd planned fell through, we quickly booked our mini-vacation to Holiday World and invited some friends to join us.

Anyway, Holiday World opened in 1946 and has grown into what it is today.  Allegedly TIME Magazine rated The Voyage the #1 Wooden Rollercoaster in the Nation* and in 2013 USA Today proclaimed Splashin' Safari to be the Best Water Park in the USA*. {*SOURCE}I haven't been on THAT many wooden coasters or to THAT many water parks, but I'd definitely hesitate to disagree with those claims.  It. Was. Awesome. We had a blast from the time we got Thursday morning until we pulled away Saturday morning.

Things that I want to brag on Holiday World for:
1. Free tea, gatorade, water, soda, and lemonade all day long. Plentiful. Oasis stations at every turn.  Amazing.
2. Free parking. All the time.
3. While we didn't use theirs, they do offer free sunscreen stations in the water park.
4. The water park and amusement park is all offered at one price. The sections are connected and you don't have to leave one to go to the other. It's all one big happy place.
5. So clean. Immaculate. Lots of shade and just a pretty place to walk or take a look around.
6. Tons of attractions for the little kids (at least ones that are 36" or taller) - from mild to wild.
7. The food.  We ate lunch and dinner in the park both days along with snacks and everything that we had was GOOD.  Not just so-so but actually really good. And fairly priced.  They miss so many chances to bleed their customers dry but they don't.  It's a refreshing change from any other theme park I've been to.
8. Everything. All the stuff.  I just loved it and can't wait to go back.

P.S. Am I getting paid for this mini "review" or was I given tickets? I wish. I just love it that much. On July 24th they announced the next addition to the park - their first steel coaster, the Thunderbird, new for 2015. Definitely ground-breaking and already has me looking forward to our next visit. I can't wait for Theo to get big enough to ride roller coasters -- he is already asking when he will be tall enough. My little adventurer.

Moving on from my new obsession -- how about some photos?  I didn't take a lot and while it stings a little to know that I missed a lot of great photo opportunities, I'm okay with it because I really took advantage of living in the moment and making the most of our trip. I didn't take any photos at all around the water park but my friend was kind enough to share ones that she snapped on her phone with me. 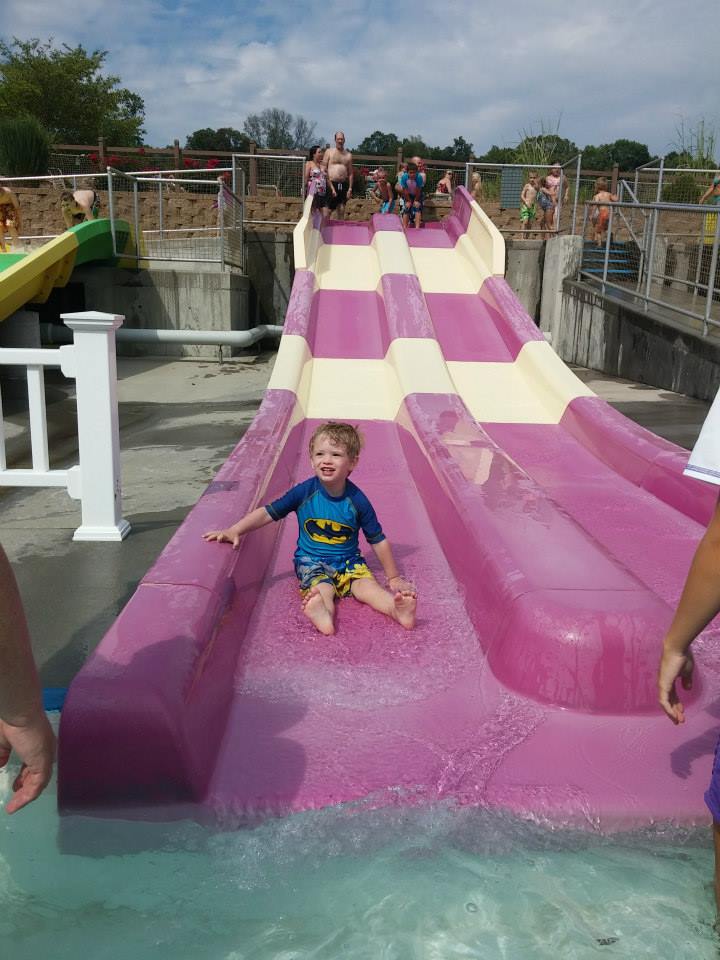 Someone crashed out during the water park both days!

Thanks, Erin, for the pictures!

Look at these little buddies riding the canoes. Big enough to ride without mom and dad. They really thought they were something -- splashing each other and breaking the rules by not keeping their hands inside the boat!

The first place we ate in the parks (yum)...

not the first or last map study breakout session.

End of the first night. Gorgeous weather. We got so lucky.

Dex passed out at the water park Thursday night and I couldn't bring myself to wake him up just to change his clothes so this is how he hung out for about 2+ hours.

L snoozin' in the camper.

I just love looking through all these pictures. I know these are memories that we will always treasure and look back on so fondly.  This post has gone on long enough so I'll shut it down but psst... in case you haven't heard, you should go to Holiday World sometime.

Email ThisBlogThis!Share to TwitterShare to FacebookShare to Pinterest
Labels: memories, photoblog, so much fun, vacation

Another week of summer has zoomed by and this one was filled with fun and festivities - our first trip to a semi-local amusement park, Ryan's birthday. As much fun as we had, there was a shadow of sadness as the anniversary of my father's death passed once again.

Linking up with Mindi from Simply Stavish, Sarah from Nurse Loves Farmer, and Stephanie from Behind the Camera and Dreaming for week 29 of this fun, year-long project.

198/365: July 16th. The night before our road trip down to Southern Indiana to visit Holiday World & Splashin' Safari. Wednesday night before we left, the kids were SO excited.  I don't think Dexter fell asleep until after 11pm. And then was awake before 6am. WHAT.

199/365: July 17th. The sun setting over Holiday World.  I was sitting with Dexter as he slept in the stroller while the others rode a ride or two.  I didn't take a lot of pictures at Holiday World, sadly. But that's alright - I was busy having fun with my babies and friends.  I posted a separate post about our trip.

200/365: July 18th.  We ended our second day at the park by running around and hitting every ride that the kids could ride but hadn't yet.  Loved the lights on their old carousel.  Holiday World has been around since 1946!

201/365: July 19th. We camped at the adjacent Lake Rudolph Campground and RV Resort in this RV. I took a few pics of the RV inside and out as we were packing up to leave on Saturday morning. I never got around to taking any more pictures that day.

202/365: July 20th. Ryan's birthday. We celebrated at Ryan's parents' house with a little chocolate cake decorated like a watermelon. The boys thought it was too cute.  I figured Nana would have some candles so I didn't bring any but she didn't so we had imaginary ones. It was just as fun.

205/365: July 23rd. The 7th anniversary of my dad's death. A few weeks earlier, my friend and I had planned to meet for dinner on this day. All day I was feeling down and having second thoughts but it was a nice distraction and good to reconnect since we hadn't been able to meet, just the two of us, since April.  We ate at Mesh on Mass and I couldn't resist this appetizer that did NOT disappoint:
MILK AND HONEY CROSTINI:
CAPRIOLE SOPHIA GOAT CHEESE / BAGUETTE /
PICKLED BLACKBERRY / SWEET LIFE FARMS HONEY

Favorite pic of the week? Hmm. I can almost taste that crostini when I look at the picture. The Holiday World pictures are probably my favorite though as they represent such fun, new family/friend memories.

Does any one photo stand out for you this week?

Meet Mommy in the Midwest 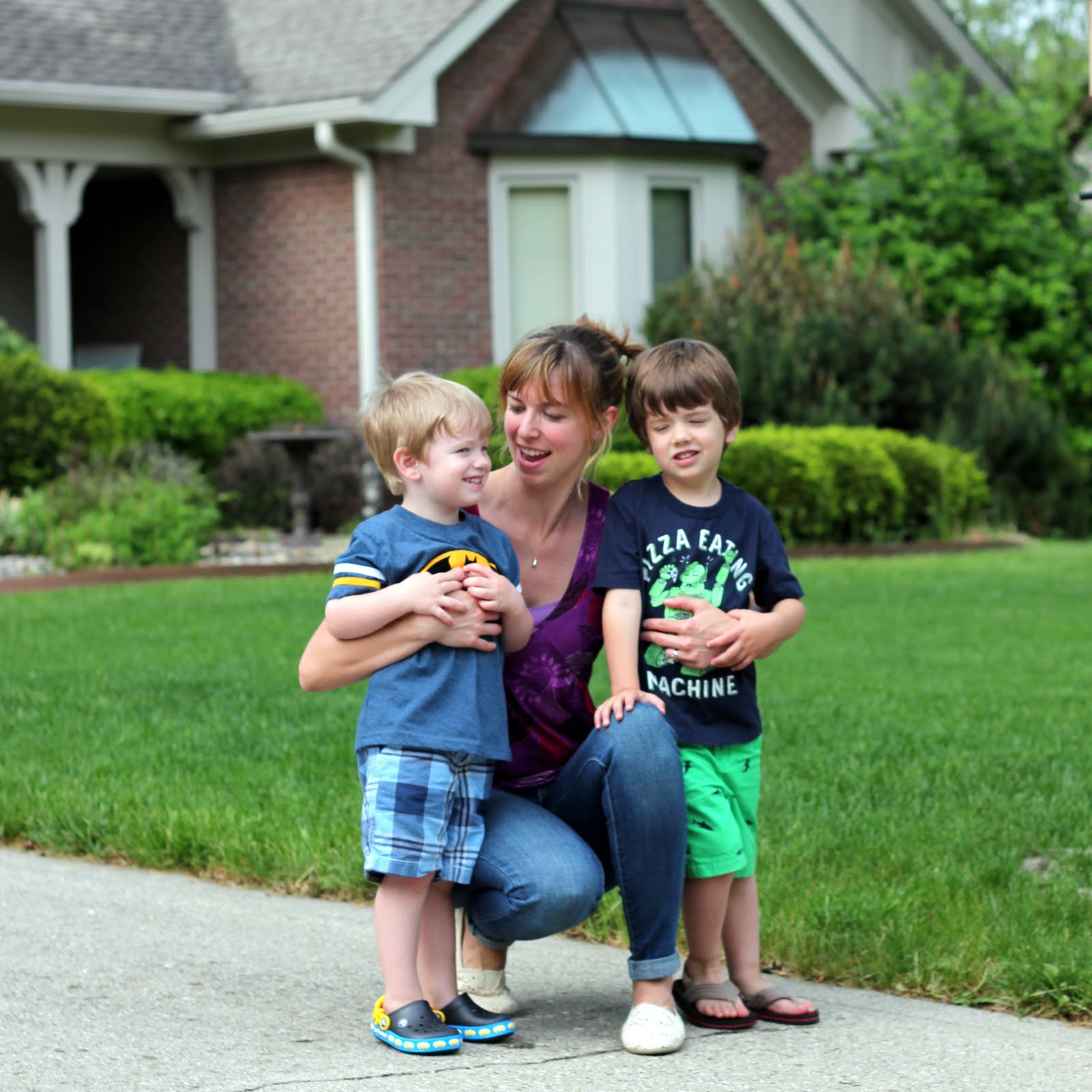